Introduction:
Oman is an Arab state occupying the southeastern coast of the Arabian Peninsula at the confluence of the Persian Gulf and Arabian Sea. In the northwest it is bordered by UAE. The capital, Muscat, lies along the northern coast. The once insular country now actively encourages tourism, and travelers come from a far to enjoy its hospitality and unspoiled landscape and the people are especially known for their hospitality and friendliness. Population of the country is nearly 3 millions.
Climate:
The climate is hot and dry in the interior and hot and humid along the coast. Summer temperatures in the capital of Muscat and other coastal locations often climb to 110 °F with high humidity; winters are mild, with lows averaging about 63 °F . Annual rainfall in Muscat averages 100mm and falling mostly in January.
Language And Culture:
The official language is Arabic in Oman and Bloch is also widely spoken. Oman was a first Arabian state to have German taught as a second language.
Oman has a sufficient cultural heterogeneity within its national boundaries and has given its historical expansion to East Africa and the Indian Ocean. Oman is a tribal society, although tribal influence is gradually declining. Its predominantly Muslim population observes social customs markedly less strict than those of neighboring Saudi Arabia. (The consumption of alcoholic beverages, for instance, is illegal for Omani citizens but is permissible for visitors in licensed dining establishments). Women in particular have enjoyed relatively more freedom in Oman than elsewhere on the Arabian Peninsula. Mealtime serves as the centre of most social gatherings. The typical Omani meal consists of rice, spiced lamb or fish, dates, and coffee or tea. Incense—notably frankincense, which is native to Oman—is burned at the end of the meal.
Omanis observe the standard Islamic holidays, including the two ʿīds (festivals), as well as several secular holidays, such as National Day (celebrating the expulsion of the Portuguese in the 17th century) and the ruling sultan’s birthday.
Sports:
Dhow racing is a popular traditional sport, as is camel racing. Bedouin still train most of the camels used for the races, which take place on racetracks and on makeshift courses in the open desert. Arabian Horses have long been bred in the country, and racing is a popular spectator sport. Falconry is practiced by the wealthy elite. More-modern activities include sand surfing and waterskiing; football (soccer) and rugby are also widely played. Oman made its first Olympic appearance at the 1984 Summer Games, but the country has not competed at the winter games. Omani athletes also participate in the quadrennial Asian Games.
Tourist attractions in Oman:
Tourism in Oman has grown considerably recently, and it is expected to be one of the largest industries in the nation. Oman has one of the most diverse environments in the Middle East with various tourist attractions and is particularly well known for Cultural Tourism. Muscat, the capital of Oman was named the Second Best City to visit in the world in 2012. Muscat also was chosen as the Capital of Arab Tourism of 2012. The main attractions are beaches, forts, world heritage sites, Horse and Camel racing and many more festivals. Oman’s coast is lined with many soft sand beaches. Activity for beach visitors include sunning, swimming, kite surfing, diving, snorkeling, boating, surfing, beach combing and shell collecting. The popular beaches are The Intercon Beach, Quantab Beach, Al Sawadi Beach, Mokallah (also known as White Beach).
Oman offers world class kite surfing Conditions, due to the daily sea breeze effect. lzaiba Beach is the hot spot for kite surfing and kite surfing lessons. The water sports are also a great attraction as the waters around Oman have an average visibility of 20–30 meters. Turtle, Dolphin and bird watching are also a great tourist attraction.  The most renowned Omani dessert safari is another tourist attraction and the activities generally include sleeping out in Barsti huts, Omani BBQ under the stars, camel riding and visiting the “Bedouins”.
The newly opened Royal Opera House is a must-see attraction in Oman. Ticket prices are around 30 OMR for the best seats, and the performances are internationally competitive. 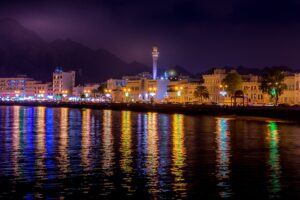 Shop culture:
Omani Markets are preferable locations to purchase handicrafts and like silver, gold, textiles and masterpieces produced by other Omani industries like daggers and coexist with modern shopping malls and other shopping centers that contain everything the visitor is looking for at the best prices. The most famous traditional market places in Oman are the Ruwi and Muttrah Souq.
Economy of Oman:
When we see the Economy of Oman, it is an agricultural country, and fishing and overseas trading are important to the coastal populations. Oil in commercial quantities was discovered in Oman in 1964 and was first exported in 1967. Subsequently the production and export of petroleum rapidly came to dominate the country’s economy. Oil revenues have grown to represent roughly two-fifths of gross domestic product (GDP) and almost three-fourths of the government’s income. In anticipation of the eventual depletion of oil reserves, the government in 1996 initiated a plan for the post-oil era that focused on developing the country’s natural gas resources to fuel domestic industry and for export in the form of liquefied natural gas (LNG). Oman also sought to diversify and privatize its economy in addition to implementing its policy of Omanization. Among the country’s major trading partners are China, Japan, South Korea, and the United Arab Emirates. In the year 2000 Oman became a member of the World Trade Organization
Production of crude oil increased in the 1990s, and in the early 21st century the country’s oil production was roughly three times the rates of the 1970s. By the end of the 1990s, the privatization plan had advanced further than those in the other states of the Gulf Cooperation Council (GCC)—Kuwait, Qatar, Saudi Arabia, Bahrain, and the United Arab Emirates. Crude oil, refined petroleum, and natural gas account for most exports, while imports consist mainly of machinery and transport equipment, basic manufactured goods, and foodstuffs. Some manufactured products are also exported.
Notable features of the appraising economy included expanding the country’s stock market, selling several government owned companies, and creating a more liberal investment environment. The country’s development has been aided in part by the GCC. The stock market capitalization of listed companies in Oman was valued at $15,269 million in 2005 by the World Bank. Oman is one of those countries with little or no national debt, but national wealth, managed via a number of sovereign wealth funds. The most significant of those is the State General Reserve Fund, or SGRF.
Major Oil & Gas Companies in Oman:
Some of the major players in oil & gas in “Oman are Oman Oil Company” (OOC), which is a national oil investment company in Oman; “Oman LNG”, is a LNG plant consists two 3.3 mtpa liquefaction trains, which were constructed by Chiyoda-Foster wheeler; “Petroleum Development Oman (PDO)”, which accounts for more than 90% of country’s crude oil production and nearly all of its natural gas supply.
Cost of Living in Oman:
The cost of living in Oman is relatively very cheap compared to UAE. The “Rial” is the currency of Oman and code is “OMR”. If we consider the consumer prices in Oman which is approx. 20% lower than that of UAE. For example the rent of one bedroom apartment would be costing you nearly 350 OMR in city center and nearly 200 OMR outside the city center which is around 50% less than that of UAE. Likewise 3 bedrooms would cost you approx. 650 OMR in the city center and approx.500 OMR outside the city center. Groceries prices in Oman are nearly 22% lower than that of UAE. The price of Gasoline in Oman is approx. 0.12 OMR which is approx. 343.46% lower than that of UAE. The price of diesel in Oman is approx. 0.15 OMR per liter which is almost 80% lower than the average world price. The price of petrol in Oman is nearly 0.14 OMR which is again very much lower than that of UAE and it is also said that Oman sales worlds cheapest petrol prices in GCC. Taxi fare starts from approx. 0.30 OMR in normal tariff and so on.
The cost of using a car in Oman is much cheaper than in Europe. Hence, every expat generally prefers to drive and few use public transportation. To hire a car it would cost you around 165 OMR a month for a medium sized vehicle. And the insurance would cost you around 250 OMR for a small car for multiple drivers. And since the petrol is also very cheap so it’s also possible to hire a car with a driver in Oman.
The healthcare consultation would cost you around 10 to 30 OMR depending on the seniority and nature of the specialist.
The cost of education is remarkably in a higher side. The nursery schools would cost you nearly 3000 OMR a year and tuition fee can cost you up to 7000 OMR for children over sixteen years old.
The cost of living in Oman would be most reasonable than any other neighboring countries in GCC. According to one of the leading survey in 2012 Muscat was ranked 179 out of 214 cities, one of the least expensive destinations in the world.
Note : For all Indians who are in process of taking up jobs and employment visas, they need to attest their Graduation / Diploma certificates from Embassy / Consulate of Oman in India and then their visa can be further processed. Manav Consultants offers assistance for certificate attestation for Oman, please get in touch with our Pune or Mumbai office at +91 22 65012151 in this regard.
by Mr.Joshi